1978 C1, C1A Gauges: This year featured two speedometers. When the pursit light switch was deployed on the right handlebar control, the left speedometer would lock at the speed the motorcycle was traveling.  This was in the days before radar was used for determining a vehicle's speed, so the locking gauge allowed the motor officer to record the speed on the citation.

1979-80 C2, C3 Gauges:  The large white-faced gauges were retained, but the dual speedometer setup was replaced with a standard speedometer and tachometer.

1981 C4 Gauges:  These were a one year only set of gauges for this model only.  Standard speedometer and tachometer. 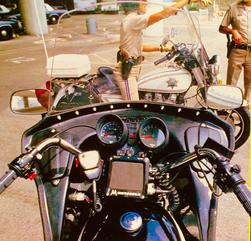 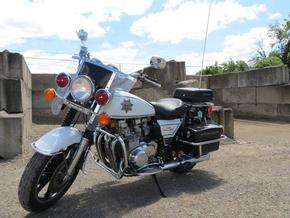 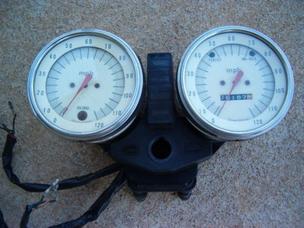 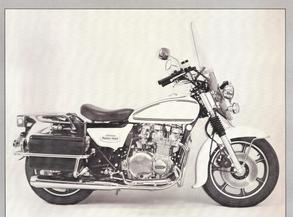 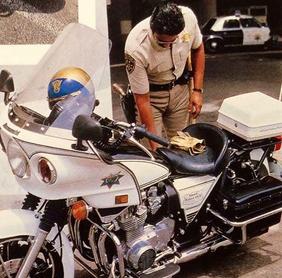 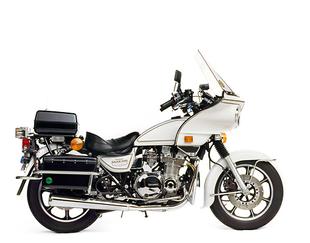 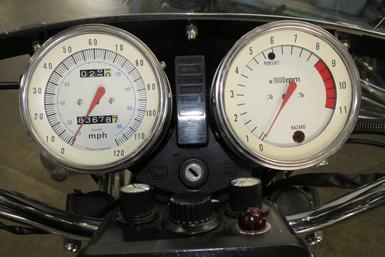 1978 C1, C1A model.  The first model made specifically by Kawasaki as a police motorcycle.  Equipped with a radio rack, dual disk brakes, mag wheels and the large plastic front fender
This was the only year to feature the dual speedometers.

1981 C4.  First year for the full fiberglass fairing.  Mirrors were mounted to the fairing in 1981 only.  Later models went back to the handlebar mounted mirrors.  The C4 also had a one year only set of gauges.

1982-2005 P-Series.  This bike also featured the full fairing, the J-motor and several other upgrades.  The P-Seres was one of the most popular police motorcycles of all time.  They are basically mechanically the same for the entire production run with very few changes. 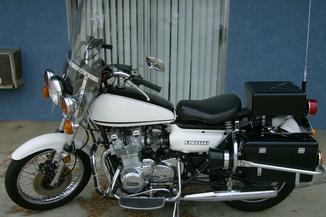 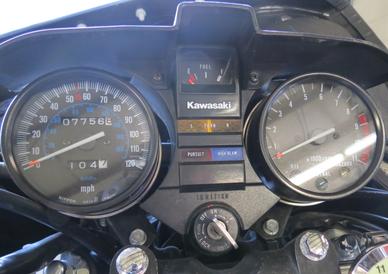 ​The Kawasaki police motorcycles have been produced in four series:

All series have been equipped with windshields, saddleboxes, pursuit lights, and folding floorboards rather than footpegs. All are a single-rider version of the Universal Japanese Motorcycle design popular until the advent of specialized motorcycle designs divided the market into cruisers, sport bikes, touring bikes and other specialized applications. All series are also designed to carry radio communications equipment and are wired for electronic sirens.

All have inline, 4-cylinder, normally aspirated four-stroke, double overhead-cam engines and chain drives, and larger generating systems than similar civilian models. C- and P-series Police Specials were also equipped with tires designed to stay on the rim in case of deflation. These run-flat tires, supplied by Dunlop, were able to increase safety significantly by enabling the rider to safely slow to a stop if the tires are damaged in a high-speed pursuit. However, the very thick sidewalls on run-flat tires transmit a much greater level of road shock to the handlebars, increasing rider fatigue; and also generated excess friction/heat which resulted in above average tire wear, prompting operating agencies to migrate to standard high-performance tires. As a result, Dunlop discontinued production of the run-flats.

The most obvious difference between the KZP and the earlier series was the addition of a fiberglass fairing, to which the front pursuit lights and windshield were mounted. The fairing also has two covered pockets for storage of small items. Due to the unique shape of the fairing, this has become the most identifiable police-service motorcycle design in the world. Earlier Kawasaki police motorcycles had a windshield with a shape similar to that found on the older Harley-Davidson Electra Glide motorcycle, then popular with law enforcement.

Mechanically, there were few changes within the series. The KZP has over 95% parts compatibility across the entire production run, and in fact the throttle twist assembly, which holds the switches for the pursuit lights and siren, kept the "M" position used by the C-series to lock the speedometer needle. A major change was in 2002, when the chain size was changed from 630 to 530, saving weight and increasing acceleration.

The most obvious change in the P-series was the introduction of LED lighting in 2003.

Kawasaki produced Police Specials for the North American market in a plant in Lincoln, Nebraska, with the last one built in September, 2005. They remained in service with major law enforcement agencies for years afterward, and became the motorcycle of choice for firms providing funeral and VIP motor-escort services.